Advocacy: Demonstrations, parades, and protests, circa 1961-1996 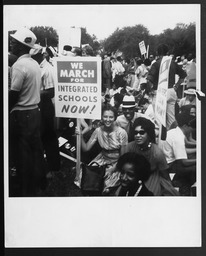 As part of their activities to work towards social, economic, and racial justice for all, the YWCA of the USA and its members participated in national and local demonstrations to raise awareness for issues important to the organization and its members. Photographed demonstrations include national events such as the 1963 March on Washington, the 1992 March for Women's Lives, and 1968 Solidarity day. Other marches and demonstrations address issues such as the Equal Rights Amendment (ERA), peace and disarmament, abortion and reproductive rights, hunger, and violence against women. While the majority of the photographs are of protests, marches and demonstrations, there are also several photographs of the 1983 Rose Parade.