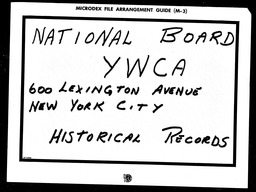 Official proceedings, principles, and actions of the Fifteenth National Convention of the Young Women's Christian Associations of the United States of America. The second half of the proceedings, continued from reel 33, microdex 9, concern the presentation and discussion of the study of the Industrial Division and its recommendations in addition to the passing and discussion of convention resolutions. Recommendations from the Industrial Division study concern the implementation of its aims, the relationship to other YWCA divisions and groups, and the relationship to the National Board and program. Convention resolutions reflect the international and national issues of the time and include official positions and actions regarding the political situation in Europe and Japan, inclusive aims and matters of discrimination, and economic security. In addition, there is some discussion of changing social conditions in the United States, an increased need for staff and support throughout the organization, a greater focus on youth movements and work with younger girls. The end of the proceedings contains a detailed topical index for searching. Following the proceedings, the convention addresses are published. Similar to the resolutions, the addresses concern the international political climate, the role of women in the changing world, the role of religion in response to social action, the labor movement, and the development of democratic organizations. A summary report of all international and economic actions from past conventions is included at the end of the section.