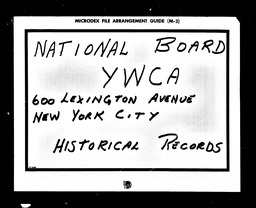 Volumes one and two of the stenotype proceedings of the Sixteenth National Convention of the Young Women's Christian Associations of the United States of America. Proceedings follow the convention from opening remarks through the Monday morning session and include all convention business, presentations, and addresses. Volume three of the stenotype proceedings follows the official proceedings on reel 35, microdex 2. Matters of national importance are discussed and voted on following a prescribed democratic process. These matters include electing board and committee members, adopting revisions to the constitutions, accepting reports and recommendations and adopting a political or social positions. Addresses and remarks include representatives from the World YWCA and experts from outside the organization. The emphases for the convention continues to be religion, democracy, and world citizenship. In response to World War II a lot of focus is on international work, conditions in other countries, and what the YWCA of the U.S.A.'s role as a Christian organization may be. As part of the international focus an address by Queen Elizabeth is broadcast to the convention. In addition to the international focus, the convention addresses the labor movement, student movements, and work with younger girls.