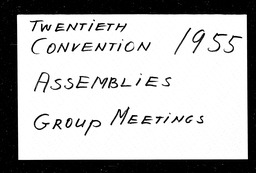 Documents concerning special interest group meetings at the Twentieth National Convention of the Young Women's Christian Associations of the United States of America. In response to the changing political, social and economic conditions faced by women, the assemblies and group meetings discuss the changing role of women and what it means to be in the workplace, at home, and in society. The National Employed Women's Assembly (N.E.W.) is a combination of all employed women, young adults, and YW-Wives. In addition to discussion of aims and purpose of the group, the assembly attempts to decide on the practicalities of incorporating the previously separate groups. At the student assembly, a workbook and discussion guide is used to look at the role of women beyond college, the meaning of being a women, and the challenges a woman can face after school. In addition to meetings of constituency groups, the convention hosts small discussion groups comprised of diverse groups of women from all parts of the YWCA. These groups are intended to stimulate discussion with members from diverse backgrounds and cover matters of spirituality, reactions to the political climate and the atomic age, segregation, and other social and political issues.