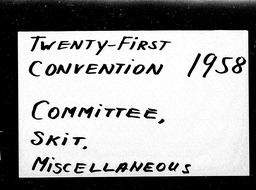 Minutes, reports, and correspondence from the Convention Committee of the YWCA of the U.S.A. and miscellaneous documents concerning the Twenty-first National Convention of the Young Women's Christian Associations of the United States of America. The Convention Committee is formed following the previous convention and is responsible for planning and making assessments of convention arrangements, facilities, organization, and programing. The committee discusses shortening the convention period and changing the structure of convention slightly in addition to other aspects of convention planning. Concerning public affairs program, summaries of the public affairs program provide an overview of social, economic, political, and racial issues and the YWCA of the U.S.A.'s official stance. Issues addressed include housing, racial segregation and racism, fair labor standards, public education and more. At the convention Grace Loucks Elliot delivers four addresses on religion in the work of the YWCA contained in the pamphlet "Decision Making." Other materials include short biographies of elected YWCA of the U.S.A. officers and letters to National Board delegates.