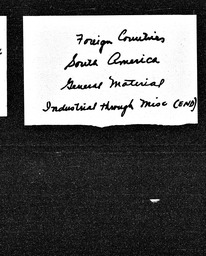 Documents concerning the programs and activities of young women's Christian associations in South America. As part of their Foreign Division work, the YWCA of the U.S.A. supports work in South America. The support is through financial grants and fundraising in addition to sending secretaries to serve abroad as leaders, trainers and advisors. This cooperative relationship also includes sharing of resources, methods and ideas especially during large projects such as building campaigns. The aim of the North American secretaries is to train local leadership so that the associations may one day be self supporting. Training occurs in special classes, schools and camps. Reports and surveys from South America inform the Foreign Division of the activities in South America, assess the needs of the associations, request further resources and funding when needed and discuss challenges faced by the women. In addition, descriptions of history, culture, religious customs, the social standing of women and the political practices of the countries with YWCA associations provide a background for the North American YWCA members so that they may approach the work informed. The "Latin American Advance" and "Latin American Clinic" are courses or readings detailing the advance of YWCA activity in Latin American and South American countries created for members of the YWCA of the U.S.A. These documents demonstrate the keen interest the YWCA of the U.S.A. had in South American countries at the time. The "International Study" provides statistics, summaries of challenges and assessments of programing for the countries with YWCA associations. YWCA activities in South America include work with employed women in business and industry, developing physical education programs, religious education, work with students and cooperation with other organizations. Often, cooperation involves working with the local YMCA's, other Christian organizations and other women's organizations. Cooperation with other religious organizations is often hindered by the complex relationship between the Protestant and Catholic churches in South America.