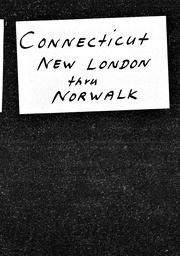 Reports, correspondence, pamphlets and administrative records concerning the YWCA of the U.S.A. in New London, Connecticut and minutes and correspondence concerning the development of work for women and girls in Norwalk, Connecticut. Documents include constitutions and bylaws, association fact sheets and histories, a residence survey, lists of leaders, visitation reports and a pamphlet highlighting the work of the association in celebration of its anniversary. Studies are used and conducted to gain insight into the association and the community it serves. Reports of studies include "A Study of the Social and Economic Conditions of the Negro Population of New London, Connecticut" by the National Urban League, a city planning report by the Planning Board of New London, Connecticut and two reports of surveys of the New London YWCA. Documents concerning the development of YWCA work in Norwalk, Connecticut include minutes of the meetings of the Girl's-Women's Division Committee of the YMCA and correspondence and reports on the needs of association work in the area.