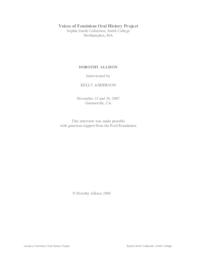 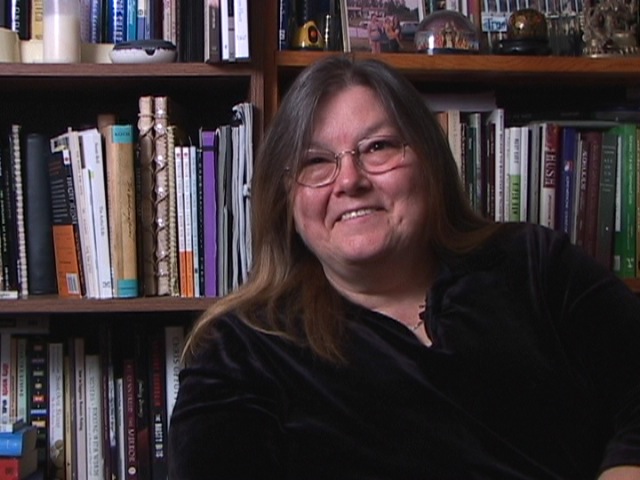 Because Dorothy Allison has written extensively about her childhood and early family life, this oral history focuses on Allison's political activism and involvement with feminism, beginning in Tallahassee, FL in the 1970s. She recounts "finding the movement" at Florida State University through the Women's Center and her parallel life in the bars, among butch-femme dykes, and her struggle to integrate the worlds of middle-class politics and working class erotics. Allison describes her myriad connections to the women's movement-from being a founder of Herstore, a feminist bookstore, to Quest, to the anti-violence movement, to Conditions, and the Lesbian Sex Mafia. Throughout, she offers an uncompromising assessment of feminism's triumphs and failures, particularly through the lenses of class and sexuality. (Transcript 62 pp.)

The interviewer and narrator for this interview have agreed that it may be placed on the web.

The narrator has retained copyright of this interview.

Dorothy Allison grew up in Greenville, South Carolina, the first child of a fifteen-year-old unwed mother who worked as a waitress. Now living in Northern California with her partner Alix and her teenage son, Wolf Michael, she describes herself as a feminist, a working class story teller, a Southern expatriate, a sometime poet and a happily born-again Californian. Awarded the 2007 Robert Penn Warren Award for Fiction, Allison is a member of the Fellowship of Southern Writers. The first member of her family to graduate from high school, Allison attended Florida Presbyterian College on a National Merit Scholarship and in 1979 studied anthropology at the New School for Social Research. An award winning editor for Quest, Conditions, and Outlook-early feminist and lesbian and gay journals, Allison's chapbook of poetry, The Women Who Hate Me, was published with Long Haul Press in 1983. Her short story collection, Trash(1988) was published by Firebrand Books. Trash won two Lambda Literary Awards and the American Library Association Prize for Lesbian and Gay Writing.

Allison says that the early feminist movement changed her life. "It was like opening your eyes under water. It hurt, but suddenly everything that had been dark and mysterious became visible and open to change." However, she admits, she would never have begun to publish her stories "if she hadn't gotten over her prejudices, and started talking to her mother and sisters again."

Allison received mainstream recognition with her novel Bastard Out of Carolina(1992) a finalist for the 1992 National Book Award. The novel won the Ferro Grumley prize, an ALA Award for Lesbian and Gay Writing, became a bestseller, and an award-winning movie. It has been translated into more than a dozen languages. Cavedweller(1998) also became a national bestseller, a NY Times Notable book of the year, a finalist for the Lillian Smith prize, and an ALA prize winner. A novel, She Who, is forthcoming.