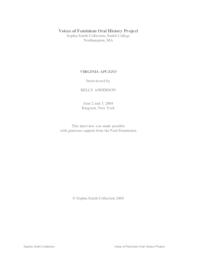 In this oral history Virginia Apuzzo discusses her family heritage, growing up in an Italian American community in the Bronx, and her choice to enter the convent. The interview is particularly strong in the areas of Catholicism, faith, and spirituality. Apuzzo discusses her coming out process and the ways that her sexuality became her politics. While she touches on the women's movement, the Houston conference, and the impact of feminism in her life, Apuzzo details in depth her relationship to the gay and lesbian movement, in particular her experience with the Task Force. She also describes her campaign for the New York State Assembly and the formation of Lambda Independent Democrats. A significant focus of the interview is Apuzzo's service in the Cuomo and Clinton administrations. (Transcript 96 pp.)

Virginia (Ginny) Apuzzo (b.1941) was raised in the Bronx, graduated with a B.A. from SUNY New Paltz and an M.A. from Fordham University, and entered the convent at the age of 26. After leaving the convent, Apuzzo came out publicly as a lesbian, taught at Brooklyn College, and dove head first into movement politics. Working with the then-named National Gay Task Force, Apuzzo worked to have a gay and lesbian plank included in the 1976 Democratic Party platform. Subsequently, she became the Director of the Task Force, directing much of her attention to the AIDS crisis. Apuzzo's impressive political accomplishments led to two decades of political appointments, first with the Cuomo administration and then the Clinton administration, where she was appointed Assistant to the President for Administration and Management, making her the highest ranking out lesbian government official to date. Apuzzo left this post in 1999 when she rejoined the Task Force as the first holder of the Virginia Apuzzo Chair for Leadership in Public Policy. She currently resides in Kingston, New York.

The Virginia Apuzzo Papers are available for research at Smith College Special Collections.