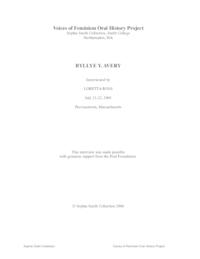 In this oral history, Byllye Avery describes her childhood in Georgia and Florida, her marriage to Wesley Avery, and her early widowhood, which propelled her into health activism in her early 30s. The interview focuses on her work in women's organizations in the 1970s, her experiences working with white women in the beginning of the women's health movement, and her experiences in establishing the premiere black women's health organization in the U.S., the National Black Women's Health Project (now known as the Black Women's Health Imperative). Avery's story proves she was an early pioneer in the women's health movement, as well as the most recognizable leader of the emerging movement of women of color working on reproductive health issues in the 1980s. She influenced an entire generation of activists while working to end reproductive health injustices experienced by all women. This interview was conducted the day before she married her long-time partner, Ngina Lythcott, who also participates in the interview. (Transcript 95 pp.)

Byllye Yvonne Reddick Avery (b. 1937) was born in Waynesville, Georgia, and grew up in DeLand, Florida. She graduated from Talladega College in 1959 and soon married. Beginning in 1971, Avery became a reproductive freedom advocate working with the Clergy Consultation Service referring women from Florida to New York City for legal abortions before the 1973 Roe v. Wade decision. As one of the few African American reproductive rights activists of her time, she served on the Board of Directors of the National Women's Health Network and worked with the Boston Women's Health Book Collective, authors of Our Bodies, Ourselves. She co-founded an abortion service, the Gainesville Women's Health Center in 1974, and she also co-founded Birthplace, a birthing center, in 1978. In 1983, Avery led the first national conference on Black women's health issues, which launched the National Black Women's Health Project in 1984 in Atlanta, Georgia. In 1989 she was the recipient of a MacArthur "genius" grant in recognition of her pioneering work on Black women's health issues, and that same year received the Essence Award from Essence Magazine. She is now the founder of the Avery Institute for Social Change and the author of An Altar of Words.