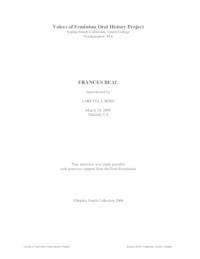 In this oral history, Frances Beal describes her unique childhood, born of parents of refugee Jewish, African American, and Native American descent. The interview focuses on her activism in the United States and in France, including founding the Women's Committee of SNCC (Student Nonviolent Coordinating Committee). Beal's story captures the challenges of anti-racist, anti-fascist and anti-imperialist organizing with a gender perspective. (Transcript 54 pp.)

Frances Beal was born in Binghamton, NY, January 13, 1940, the daughter of Ernest Yates, who was of African American and Native American ancestry, and Charlotte Berman Yates, of radical Russian Jewish immigrant roots. When Fran's father died, her mother moved the family to St. Albans, an integrated neighborhood in Queens. In addition to observing her mother's participation in left politics, Fran was profoundly affected by the murder of Emmett Till. After graduating from Andrew Jackson High School in 1958, she became involved in civil rights activities and socialist politics while attending the University of Wisconsin. She married James Beal, and from 1959 to 1966, they lived in France, where they had two children and Fran became attuned to the internationalist/anti-imperialist politics of post-colonial African liberation struggles. During summers in the US in those years, she maintained connections with the Student Nonviolent Coordinating Committee (SNCC). When her marriage ended and she returned to the United States in 1966, Beal took a job with the National Council of Negro Women, where she worked for a decade.

In 1968 Beal co-founded the Black Women's Liberation Committee of SNCC and wrote one of the defining documents of black feminism, "Double Jeopardy: To Be Black and Female" (Sisterhood is Powerful, ed. Robin Morgan, 1970). The Committee quickly evolved into the Black Women's Alliance and soon, in order to include Puerto Rican women, into the Third World Women's Alliance (TWWA). TWWA rejected a feminism that posits sexism as the primary source of women's subordination and developed an analysis predicated on the interaction of race, class, and sex oppression and on an international perspective. Beal's work on gender, race and class laid the groundwork for current analyses of intersectionality. She became a member of the TWWA chapter in New York, where her organizing in the 1970s centered on abortion rights and sterilization abuse.

In the 1980s Beal moved to California where she served as associate editor of The Black Scholar and wrote a weekly column in the San Francisco Bay View. In recent years she has worked with the National Anti-Racist Organizing Committee (NAROC) and with the Racial Justice Project of the ACLU of Northern California. She is the National Secretary of the Black Radical Congress. Beal lives in Oakland, where she continues to write.