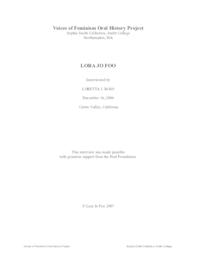 Foo describes a childhood in which gendered Chinese cultural norms combine with race and class discrimination to shape her emerging identity and educational options. She recounts theradicalizing effect of Asian American Studies in college and details her experiences in organizing immigrant women workers. Foo assesses the status of Asian American women’s organizations and reflects on the current state of progressive politics in the U.S. The interview concludes with a nod to the pleasure she takes at this stage of life in wilderness experience and nature photography as means of exploring personal emotions and countering the stress of social justice work.

This interview is open for research use without restriction. This interview was formerly closed at the direction of the narrator until January 1, 2020.

The interviewer and narrator for this interview have agreed that it may be placed on the web.

The narrator has retained copyright of this interview.

Lora Jo Foo is a labor organizer and attorney specializing in employment/labor law. She is a native of San Francisco, born and raised in the Chinatown community, where she began working as a garment worker in a sweatshop at the age of 11. She went back into a garment factory to work after college, this time as a union organizer. She then became a hotel worker and was a leader in the 1980 citywide strike of 6000 San Francisco hotel workers. After graduating from law school, she worked for a private labor law firm representing unions.

From 1992 to 2000, she was the employment/labor attorney for the Asian Law Caucus in San Francisco, California where she represented Asian American immigrant workers in sweatshop industries - garment, restaurant, construction, domestic and other low-wage industries, in their struggles for decent wages and working conditions. Ms. Foo's numerous litigation successes as an attorney for the Caucus include the 1993 case of Anna Chan et al v. Moviestar, in which she obtained the first judgment from a California court holding a garment manufacturer responsible for the wages of its subcontractor's employees. In 1998 she won the Cuadra et al v. Labor Commissioner case before the state Supreme Court, a case which ensured that workers throughout California who utilize the administrative process to recover unpaid wages would recover 100% instead of a diminished portion due to an arbitrary method of calculations by the agency. In 1999 she led a statewide coalition of garment worker advocates in passing the California Garment Accountability Bill, which holds retailers and apparel firms strictly liable for the minimum wage and overtime violations of their contractors.

Ms. Foo stopped litigating in 2000, returned to school, and obtained a Masters in Public Administration from the Kennedy School of Government at Harvard University in 2002. In 2004, she returned to her roots as a labor organizer and was the National Coordinator of the AFL-CIO's Voting Rights Protection Program, where she launched programs to protect the vote in 11 battleground states. In 2006 she joined the California Faculty Association as its Northern California Organizing Director.

Foo co-founded the National Asian Pacific American Women's Forum and was its National Chair from 1996 to 1998. She is also a co-founder of the California-based Sweatshop Watch and served as its Board President from 1995 to 2004. She is the author of Asian American Women: Issues, Concerns and Responsive Human and Civil Rights Advocacy, published by the Ford Foundation in September 2002 (second edition, 2007).