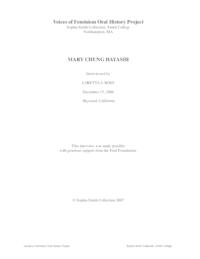 In this oral history Mary Chung Hayashi describes her childhood in South Korea and in the U.S. and discusses the circumstances that have led her to launch successive organizations addressing health issues in the Asian American community. She also discusses her path towards becoming the first Korean American elected to the California State Assembly. (Transcript 34 pp.)

Chung Mi Kyung was born in 1967 in Kwangju, South Korea, one of five children of Chung Yeon Sang, a businessman, and Hun Cha Yang, a tennis player. The family moved to Seoul in 1978. Several decisive changes occurred in 1980. Her older sister committed suicide. Within months, her parents separated and her father migrated with the children to Orange County, California. In the U.S., Mi Kyung took the name Mary and struggled with the competing pressures of maintaining traditional Korean family and gender norms while assimilating to the more individualistic U.S. culture.

After high school, Chung attended California State University Long Beach, where she was exposed to feminist ideas and literature. After moving to Oakland, she combined ongoing college study of Asian American history and culture with employment as a bookkeeper and community involvement in feminist, civil rights, and Asian American women's reproductive rights and anti-violence organizations. She became the first director of Asian Pacific Islanders for Choice (which became Asian Pacific Islanders for Reproductive Health, and later Asian Communities for Reproductive Justice).

Chung remained profoundly influenced by her sister's suicide. She chafed at the silencing effects of Asian gender and cultural norms on the one side, which enforced silence about sexual and mental health and personal matters in general, and the U.S. myth of Asians as a model minority on the other. Inspired by African American and Latina women's health activism, Chung created the National Asian Women's Health Organization (NAWHO) in 1993. The first national organization dedicated to improving the health status of Asian Pacific Islander women in the U.S., NAWHO conducts surveys, generates data, and fosters women's leadership as advocates for Asian and Pacific Islander Americans. More recently Chung founded the Iris Alliance Fund, a mental health foundation dedicated to youth suicide prevention.

She earned a B.S. in 2000 from University of San Francisco, followed by an M.B.A. from Golden Gate University. In 2001 she married David Hayashi, a civil rights attorney. In 2006 Hayashi became the first Korean American woman elected to the California State Assembly. She is the author of Far From Home: Shattering the Myth of the Model Minority (2003).