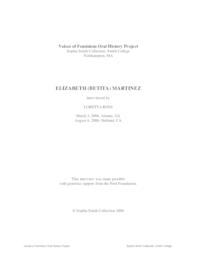 Link to transcript of interview with Betitia Martinez

This oral history offers a general overview of Martinez' life and work. Martinez reviews her childhood and her political experiences from SNCC forward. She discusses the difficulty of sustaining left groups in the face of sectarianism and government infiltration. Martinez comments on current domestic and international politics and reflects on tensions between her activism and her role as a single parent. (Transcript 70 pp.)

Elizabeth (Betita) Martinez was born December 12, 1925. As the child of a dark-skinned Mexican-born father and a white Euro-American mother, Betita met discrimination as she was growing up in segregated Washington, D.C.

During World War II, Martinez attended Swarthmore College, where she was the only non-white student on campus. After graduation in 1946, she worked at the newly-established United Nations, where she researched decolonization efforts and strategies. In the late 1950s she became an editor at Simon & Schuster, and later Books and Arts Editor of The Nation magazine. She also became active in the U.S. civil rights movement, directing the New York office of the Student Nonviolent Coordinating Committee (SNCC) and participating in SNCC's Freedom Summer in Mississippi in 1964.

From 1968 to 1976, Martinez lived in New Mexico where she became founding editor of El Grito del Norte (The Cry of the North), a monthly community newspaper that linked the Chicano land movement to similar struggles around the world. She served as founding director of the Chicano Communications Center in Albuquerque to teach Chicanos about history and contemporary issues.

After moving to California in 1976, Martinez joined the Democratic Workers Party, a Marxist group led by women, and became involved in Central American solidarity work, local struggles for social justice, and grassroots organizing to save public services. In 1982 she ran for Governor on the Peace and Freedom Party ticket. In addition to teaching ethnic studies and women's studies on several campuses, she traveled extensively to observe efforts to create socialist societies. Her travels included trips to China, the Soviet Union, Vietnam, Hungary, and Poland, in addition to several trips to Cuba beginning in 1959. In 1997 Martinez co-founded the Institute for Multiracial Justice which promotes alliances among communities of color on a range of issues. She edited the Institute's newsletter, Shades of Power.

Martinez' publications include The Movement (1963) and Letters from Mississippi (1965; reissued 2002), and De Colores Means All of Us: Latina Views for a Multi-Colored Century (1998). Her bilingual book Five Hundred Years of Chicano History, first issued in 1976 as 450 Years of Chicano History, is in its sixth edition. She is completing another bilingual book, Five Hundred Years of Chicana History, a pictorial survey [published 2008]. She is a frequent contributor to anthologies, including The Feminist Memoir Project, and to Z and other progressive magazines.

Martinez has received numerous awards for her social justice work. In 2005 she was a nominee for the 1000 Women for the Nobel Peace Prize. Martinez lives in San Francisco where she continues to write, lecture, edit and teach.

After a brief first marriage, Martinez married Hans Koning, author of 40 fiction and nonfiction books. In 1954 they had a daughter, Tessa, before divorcing. Tessa, an actress, lives in San Francisco.