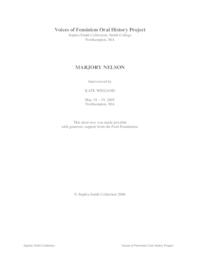 In this oral history Marjory Nelson describes her childhood in the 1930s and 1940s in an upper middle-class academic family in New Brunswick, NJ, her life as a typical white suburban housewife and mother in the 1950s and 1960s, her transformation into a middle-aged white academic feminist and leftist political activist after 1968, and her experiences as a lesbian activist living and working in San Francisco since the late 1970s. The interview focuses on Nelson's transformation from married housewife to activist academic, her work with the National Woman's Party and its founder Alice Paul, her personal and political relationship with old left lawyer Mary Kaufman, her involvement in interracial feminist organizing in the 1970s, and her work as a lesbian activist in California since the 1980s. Nelson's story details the ways the social and political upheavals of the 1960s and 1970s, especially the second wave of the women's movement, changed many women's lives. It also illustrates important connections between feminism and a variety of other twentieth century movements for social change. (Transcript 89 pp.)

Marjory Nelson (b. 1928) grew up in New Brunswick, NJ. She married at age 19 and defined herself primarily as a wife and mother for the next 20 years. Inspired by Betty Friedan's The Feminine Mystique, Nelson returned to college in the mid-1960s and began to participate in the radical political movements of that decade. She graduated from the University of Akron with a B.A. in 1966 and an M.A. in Social Psychology in 1968. She was awarded a Ph.D. in Sociology from the State University of New York at Buffalo in 1976, having completed a dissertation which examined the National Woman's Party. She was instrumental in the founding of Women's Studies at both SUNY-Buffalo and at Antioch College in Ohio. Nelson has been involved in peace, civil rights, feminist, and lesbian activism; her most notable political activities include lobbying for the ERA in Congress, organizing to free Joann Little and the Wilmington Ten, and co-founding the Women's Building in San Francisco. Her articles and essays have appeared in a wide variety of feminist publications including Sinister Wisdom, Sojourner, and off our backs. Since the 1980s Nelson has lived in San Francisco where she works as a hypnotherapist and a lesbian feminist activist.

The Marjory Nelson Papers are available for research at Smith College Special Collections.