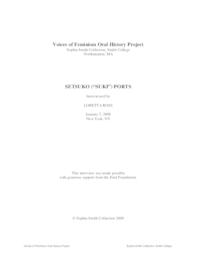 Ports recalls vivid stories of the impact of FBI surveillance of her family during World War II, including her mother's house arrest. She describes growing up in a Japanese American family in the postwar years. She details racial tensions in her personal life and public work, and comments on cultural norms and stereotypes that have influenced her ability to speak out. Ports summarizes her years of organizing around AIDS.(Transcript 91 pp.)

Setsuko ("Suki") Terada Ports was born December 12, 1934, in New York City. Her mother, Sumiko Takai, had immigrated from Japan to the US as a child with her family. Her father, Yoshio (Albert) Terada, was born in Hawaii; he owned a gift shop in New York City that catered to a Japanese clientele. Both were college graduates.

Suki grew up and has lived most of her life in the Morningside Park neighborhood of Harlem. She attended the Horace Mann-Lincoln School (lab school of Teachers College at Columbia University) and the High School of Music and Art, and graduated from the New Lincoln School. After graduating from Smith College as an education major in 1956, she taught for a year in Turkey, where she met her husband, Horace Gonder Ports, Jr. Their marriage in 1958 generated considerable racial hostility from her white in-laws. Her husband died in 1971 at the age of 36, leaving her a single mother of three. She held a series of short-term jobs in the 1970s.

Ports' community-based activism began in the 1960s with engagement in local educational issues and struggles over the neighborhood park and access to public space. Since the 1980s she has focused her energies on HIV/AIDS and on the needs of low-income AIDS patients with the least access to health care and social services: people of color, women, drug addicts. She created the Minority Task Force on AIDS under the auspices of the Council of Churches in 1985 and was a co-founder of the National Minority AIDS Council in 1986. In 1989 she founded the Family Health Project to focus on issues of women of color and AIDS.

Ports has served on the boards of numerous organizations, including Asian Americans for Equality, the New York Women's Foundation, and Asian Pacific Islander Women's HIV/AIDS Network, the National Minority AIDS Council, the Sister Fund, and the Japanese American Association of New York. She has consulted to multiple projects targeting race, class, and gender inequities in health care, and she is the recipient of numerous awards, including the Susan B. Anthony Award of the NYC chapter of the National Organization for Women, the Frederick Douglass Award of the North Star.