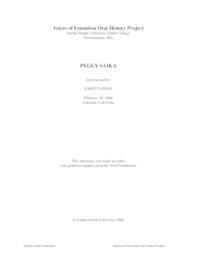 In this oral history, Saika underscores the lasting impact of the internment experience as a call to vigilance and action. She traces her political involvements from pan-Asian student activism in the late 1960s forward, marking her journey through various forms of organizing: direct service, civil rights, community organizing, and philanthropy. The interview offers a general outline of Saika's path as a postwar progressive who embraces her generation's challenge to build an ethnic movement that affirms Asian American identity and rights while it also advances a broad anti-racist, feminist, class-conscious social justice agenda. (Transcript 55 pp).

Peggy Saika was born February 26, 1945, in an Arizona internment camp. Her Japanese American family settled in Sacramento after the war. Peggy was the youngest of five children in a working-class, Buddhist family. Her father, Fred Taro Saika, was a farmworker; her mother, Dorothy Fukushima, worked in canneries and cleaned houses. After high school Peggy worked as a hairdresser while earning an undergraduate degree at Sacramento State College. She later earned a master's degree in social work.

In the late 1960s and early 1970s, Saika was involved in left study groups and in Asian American and multiracial community activism for education, immigrant, tenant, and labor rights in Sacramento. She became coordinator of Asian Community Services. Encounters with sex discrimination in employment, an abortion experience, and an abusive personal relationship attuned Saika to women's issues as well. While living in New York City from 1978 to 1983, she worked at the Chinatown Health Center and was active in Bronx Women Against Rape (WAR), the Organization of Asian Women (OAW), and third world women's activism.

Since returning to the Bay Area in 1983, Saika has continued to combine employment in nonprofits with community activism. From 1983 to 1991 she served as executive director of the Asian Law Caucus. In 1986 she became the first Asian American appointed to the Alameda County Commission on the Status of Women. She was a co-founder of the Asian Women's Shelter, the first shelter for abused Asian women in northern California, and in 1989 she helped organize Asian Pacific Islanders for Choice (APIC). From 1993 to 2000 Saika served as founding executive director of the Asian Pacific Environmental Network (APEN). After attending the 1995 UN Women's Conference in Beijing, she participated in creating the National Asian Pacific American Women's Forum (NAPAWF). Since 2002 Saika has been executive director of Asian Americans/Pacific Islanders in Philanthropy (AAPIP). She is active in the Buena Vista United Methodist Church.

Saika has served on several boards, including the Ms. Foundation for Women, the California Wellness Foundation, the New World Foundation, and Choice USA. Saika is married to Art Chen, a political activist and physician. They have two children.