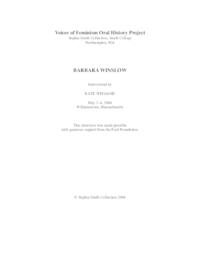 In this oral history Barbara Winslow describes her privileged childhood in Westchester County, New York, and at Solebury Academy in Pennsylvania. The interview focuses on Winslow's activism as a socialist, a feminist, and a historian. Her story documents the life of a socialist activist and feminist and the challenges that come with combining those two identities. It also details the ins and outs of grassroots feminist activity in Seattle in the 1960s, in Cleveland, Ohio, in the late 1970s and early 1980s, and in New York City from the mid-1980s on. (Transcript 73 pp.)

Barbara Winslow (b. 1945) grew up in Scarsdale, New York. She attended Antioch College for three years but graduated from the University of Washington with a B.A. in 1968 and a Ph.D. in history in 1972. A student and antiwar activist, she was instrumental in founding Women's Liberation Seattle and was heavily involved in grassroots feminist activity, particularly reproductive rights, in Seattle, Detroit, Cleveland, and New York City. Active in socialist and feminist politics for many years, Winslow was also at the forefront of the movement to integrate women, African Americans, and the working class into the teaching of history in the 1970s. She is currently teaching history and women's studies at Brooklyn College.