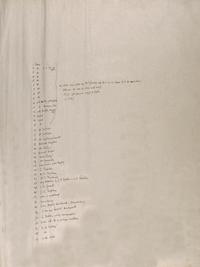 There are a few prints by famous photographers, including Julia Margaret Cameron (1815-1879), Henry Herschel Hay Cameron (1852-1911), Camille Silvy (1834-1910), Gabriel Loppé, Oscar G. Rejlander (1813-1875), and Lock & Whitfield. Most prints, however, are anonymous. A variety of photographic techniques are represented, including albumen, platinum, and silver prints. Many are undated. Most of the photographs were taken in England (Cornwall, London, Somerset, Sussex), but a few, mounted on the final leaf, were taken at Alpine resorts in Switzerland.

The album was compiled by Leslie Stephen after Julia Stephen's death on 5 May 1895. The list of contents, leaf numbers, and captions are written in Leslie Stephen's autograph.

The album was purchased at auction on 6 December 1984 (Sotheby's, London, lot 289) and presented to the Mortimer Rare Book Room, Smith College, by Elizabeth Power Richardson and Phyllis Cooley Paige in memory of Mary Byers Smith. Twenty-three leaves were removed before the London sale and disbursed, including many photographs by Julia Margaret Cameron.

The material is divided into seven series following the order in which they were mounted by Leslie Stephen. The appendix contains a listing of the photographs in chronological order, a listing of the people pictured, and a short list of the places photographed.

This collection is open for research use without restriction beyond the standard terms and conditions of Smith College Special Collections.

English critic, man of letters, and first editor of the Dictionary of National Biography.

A member of a distinguished intellectual family, Stephen was educated at Eton, at King's College, London and at Trinity Hall, Cambridge, where he was elected to a fellowship in 1854 and became junior tutor in 1856. He was ordained in 1859, but his philosophical studies, combined probably with the controversy that followed the publication of Charles Darwin's Origin of Species (1859), caused him to loose his faith; in 1862 he resigned his tutorship and two years later left Cambridge to live in London.

Through his brother, James Fitzjames Stephen, a contributor to the Saturday Review, Stephen gained entry to the literary world, contributing to many periodicals. In 1871 George Smith offered him the editorship of The Cornhill Magazine, for which he wrote literary criticism later republished in the three series of Hours in a Library (1874-1879). Stephen was one of the first serious critics of the novel, and his works still deserves considerations by the historians of literary criticism. Thomas Hardy, Robert Louis Stevenson, Edmund Gosse, and Henry James were among those whom Stephen, as an editor, encouraged. After eleven years he resigned from the editorship of Cornhill, but he continued to write for periodicals.

His greatest learned work was his History of English Thought in the Eighteenth Century (1876). His philosophical study The English Utilitarians (1900) was somewhat less successful, though it is still a useful source. His philosophical contribution to the rationalist tradition, Science of Ethics (1882), attempted to wed evolutionary theory to ethics. Stephen's most enduring legacy, however, is the Dictionary of National Biography, which he edited from 1882 to 1891. He edited the first 26 volumes and contributed 378 biographies to that important reference work. In recognition of this service to letters he was created Knight Commander of the Bath in 1902 and received other honours. Stephen's English Literature and Society in the Eighteen Century (1904) was a pioneer work in the sociological study of literature.

Stephen was shy and given to silence, the more so after the death in 1875 of his first wife, Harriet Marian, the second daughter of William Makepeace Thackeray. In 1878 he married Julia Jackson, the widow of Herbert Duckworth, and among their four children were painter Vanessa Bell and the novelist Virginia Woolf. Noel G. Annan's Leslie Stephen: His Thought and Character in Relation to His Time (1952; reprinted, Walter P. Metzger, ed., 1977) is a notable study. Sir Leslie Stephen's Mausoleum Book (1978), edited by Alan Bell, is an autobiography written after the death of Stephen's wife Julia in 1895.

English literary critic, author, man of letters, father of Virginia Woolf and Vanessa Bell, and first editor of the Dictionary of National Biography. Contains 73 photographs taken between 1856 and 1894 and mounted on 16 leaves.

This collection is organized into seven series:

The material is divided into seven series following the order in which they were mounted by Leslie Stephen. The appendix contains a listing of the photographs in chronological order, a listing of the people pictured, and a short list of the places photographed.

Existence and Location of Copies

Images from this collection are also available in the online exhibition Leslie Stephen's Photograph Album. Please consult with Special Collections staff to request copies of these digital files.

Twenty-three leaves were removed before the London sale and disbursed, including many photographs by Julia Margaret Cameron.